This blog will highlight the following key areas:

What are R and Python?

R is an open-source programming language developed for statistical analysis and computations.

Well to start with, R packages are solely managed by CRAN (The Comprehensive R Archive Network) repository that manages the updated versions, their installations, and related documentation of R Packages. All the packages you install in R are stored in CRAN. Also, any new package to be added in R should be submitted to CRAN. Currently CRAN has over 16000 additional statistical packages. This is why it is easier to install R.

On the other hand, Python has two package management platforms, Conda and PyPI (Python Package Index) that include over 100k Python packages. There have been inconsistencies found in Packages, Libraries, and Versions while installing Python due to two repositories. Due to this reason, it is a little tedious to install Python. If you are someone who wishes to make a career in Data Science, then the ultimate question you have to face is, which programming language you should learn and why? There have been numerous discussions on public forums with people advocating for R or Python for plenty of reasons.

Though it completely depends on your choice, comparing both the languages on some grounds will surely help you make the right decision.

What are R and Python?

R is an open-source programming language developed for statistical analysis and computations.

Well to start with, R packages are solely managed by CRAN (The Comprehensive R Archive Network) repository that manages the updated versions, their installations, and related documentation of R Packages. All the packages you install in R are stored in CRAN. Also, any new package to be added in R should be submitted to CRAN. Currently CRAN has over 16000 additional statistical packages. This is why it is easier to install R.

On the other hand, Python has two package management platforms, Conda and PyPI (Python Package Index) that include over 100k Python packages. There have been inconsistencies found in Packages, Libraries, and Versions while installing Python due to two repositories. Due to this reason, it is a little tedious to install Python.

Want to read about Python in detail? Read this riveting blog!

R has all the features that Python has in terms of programming ability, statistical computing and modeling, but Python is more flexible and robust. Python is a better option when it comes to integrating it with web applications and production.

However, R is less robust and versatile, which is why it is limited to statistical computing and mathematical modeling.

One of the most frequently asked questions is “Which between R and Python is easy to learn?”.

Both R and Python have almost similar features, but when it comes to syntax, R is a little complicated and is better for someone who is already familiar with other programming language. On the other hand, Python has a relatively simpler and readable syntax and hence, for anyone who is about to start-off with a programming language, Python is a good option.

However, when the model building becomes complicated, it requires someone who is proficient in Python.

Usually Python is 8 times faster than R till there are up to 1000 iterations. When the number of iterations increases, R typically surpasses Python’s speed. In comparison to Python, R requires more lines of codes to perform a certain task, which make the programs more complex and bulkier.

R was designed for statistical computation and Modeling purposes and hence it performs better for any level of complex computation. R has better statistical packages and libraries for dashboard than Python. Python being a general programming language somehow lacks the packages and libraries for Data Science. Python is better suited for modeling and machine learning, which is complicated in R.

The focus of R is primarily into statistical analysis and hence it is better suited to academia and research. On the other hand, Python being the programming language for all purposes is suitable for tech industry. However, Python also comes with packages that can create an environment similar to R.

There are plenty of other grounds that differentiate R from Python. The following table will further clarify that!

One of the familiar questions that we read these days on platforms such as Quora is: how do I become a professional Python programmer?

Yes, today many IT professionals are willing to pursue their career as Python programmer.The reason for the rise in such trend is because Python is emerging as the one of the most powerful programming languages of the present IT world.

Today we can see that more and more companies are relying on Python to develop their software projects across different industries. This programming language is being used in various fields such as Artificial Intelligence, Machine Learning and Data Science etc.

These are some of the factors that have led to offered huge career opportunities for young aspiring professionals across the world.

If you are new to the world of Python and are willing to learn it then we recommend to look into these online courses that contains a library of Python course that help you to learn this programming language efficiently.

In this blog, I will be covering the following topics.

Python is a general purpose, object oriented, easy to learn programming language. There are many reasons why one needs to learn Python. Some of them are as follows:

Now let us see some of the career opportunities of Python Programming. 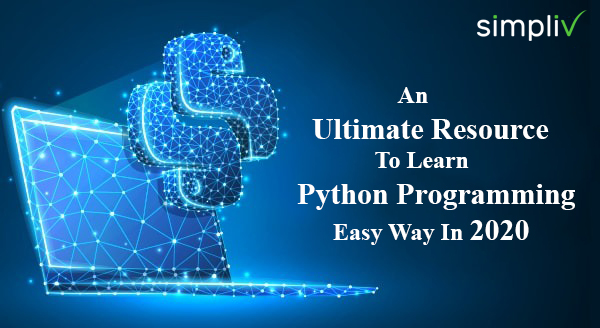 For anyone serious about pursuing and growing in a career in IT, a basic question that roils the mind is this: which is the best programming language to learn? Most people who want answers to this question tend to get slightly confused, because they would have heard about multiple languages, such as Java, Python, PHP, etc. It is in selecting that one truly apt programming language to learn that the challenge lies.

Every programming language has its advantages as well as disadvantages. A language that is perfectly suited for developing a certain types of applications  might not fit for developing other types.

So, keeping the debate aside of which programming language is good to learn among all, here in the following discussion we will focus towards understanding what is Python programming language and what are its benefits. At a later stage of this blog, we will discuss different reasons to learn Python.

In the upcoming discussion we will focus on the following topics:

Initially, let us discuss what is Python

What is Python? This is one of the most asked questions  these days in the technology space. The answer is, Python is one of the powerful programming languages that is high-level, open-source, and most commonly used for web development, scientific and mathematical application development, etc.

One of the great advantages of this programming language is it provides excellent library support and has a large developer community. It also provides easy integration with web services and GUI-based desktop applications.

“Did You Know? Python is one of the 9 programming languages that influenced the design of JavaScript”.

Apart from web development and desktop app development, Python is extensively used in the Data Science field and is used for developing Machine Learning projects. Because of its huge popularity, many IT professionals are learning this programming language to build their career as a Python developer.

Having understood what is Python, let us start exploring the different versions of Python, such as Python 2 and Python 3. Later we will look at the major differences between them.

Python 2 has implemented technical details of Python Enhancement Proposal (PEP). Python 2.7 or Python 2.7.20 is the last version of Python 2 and is no longer under development and in the year 2020, it will be discontinued.

Different versions of Python and their release dates are as follows:

Python 3: Python 3 is an improved version. It was released in the year December 2008. This  version was released with the aim of fixing the errors that existed in Python 2. Many companies are switching towards Python 3 version. This version provides huge library support.

Different versions of Python 3 and release dates are as follows:

Some of the key differences between Python 2 VS Python 3: 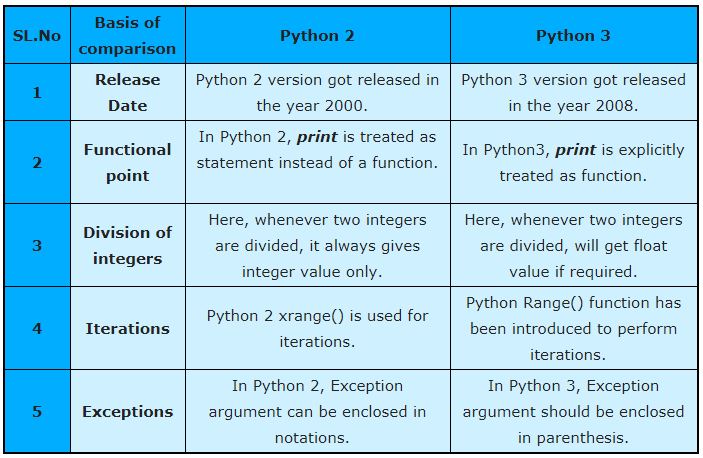 The above description provides you some valuable information about the major differences between the Python 2 and Python 3 versions. Before you choose a particular version of Python to develop your project, it is recommended to be well aware of all the available packages you need or you want to use because both these versions have similar kinds of syntax but they are not entirely compatible.